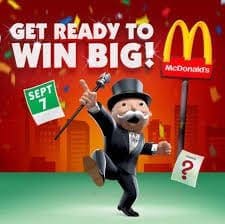 First starting in 1987 this McDonalds campaign has spread from the US all around the world like wildfire. This global annual tradition runs for 6 weeks giving customers a limited window of time to win a piece of the $532 Million dollar prize pie. In order to participate in the campaign patrons of McDonalds are required to purchase from the menu of said Fast-Food Giant. The more money spent in any single transaction boosts the number of tickets obtained from food items. When you upsize from a small to a medium or large meal deal you are rewarded with additional tickets.

The Campaign allows Monopoly players to arrange their inventory of potential winnings on a vibrant easy to use mobile app that is available for download from all major services. The design of the app gives users digital fulfillment with its enticing animations, helping them feel satisfied with their purchase  especially when prizes are won. This gives the mindset of that when purchasing McDonalds there is also the possibility of winning instantly redeemable food prizes to a brand new Volkswagen SUV. The guilt that generally accompanies fast food purchases is now swept under the rug temporarily thanks to this campaign. These factors are contributing to widening the gap between McDonalds and other fast food giants such as KFC and Hungry Jacks. 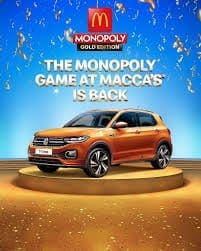 You would be suprised by what financial benefits come from such a huge promotional pay to play campaign like McDonalds Monopoly. Even though the odds of winning a major prize are holistically low, just knowing there is a possibility that any customer could walk into a franchise and leave with the ticket to a new car still draws in close to 70 million customers a day. Since the start of the promotion on the 2nd of September 2020 only a third of vehicle prizes have been won. Despite McDonalds promoting an almost guaranteed win rate with 1 in 5 tickets sporting an instant prize, customers are almost always left just short of a big win with majority of prizes won being either a free serving of chips or small drink. The McDonalds Monopoly campaign is a huge marketing success, only capable of being pulled off by a multi-billion dollar company.